Home > Blog > What Is an SSD? A Basic Definition 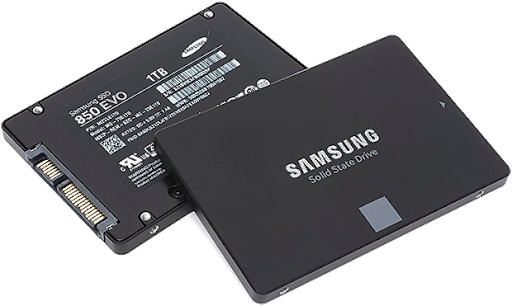 What Is an SSD? A Basic Definition

SSD stands for solid-state drive, a type of PC storage that’s faster than a hard drive. An SSD is able to read and write data much faster than a mechanical hard drive. The worst SSD is at least three times as fast as a hard drive. You’ll especially notice the difference when turning your PC on, opening an application, or switching between tasks.

There are two different types of SSDs: NVMe, also known as PCIe or PCIe-NVMe, and SATA.

What is a SATA SSD?

SATA SSDs look like laptop hard drives, flat and rectangular like the Samsung pictured above. They are the lowest grade SSD and use the same interface as hard drives. However, a PC that uses a SATA SSD has three to four times the bandwidth (how much data it can read/write simultaneously) than a PC using a hard drive. SATA SSDs are also more abundant and cheaper than NVMe-PCIe ones and are still great for common applications.

What is an NVMe SSD?

One type of SSD is PCIe/NVMe/PCIe-NVMeSSDs. PCIe stands for peripheral component interconnect express, and NVMe stands for non-volatile memory express. A PC using the fastest PCIe-NVMe SSD reads and writes at four or five times the speed of a PC using a SATA SSD. As such, PCIe-NVMe SSDs are better and more expensive than SATA SSDs. To install a PCIe-NVMe SSD onto your motherboard, you’ll need to buy a motherboard with PCIe slots.

Unwanted SCAM SMS messages and how to avoid them